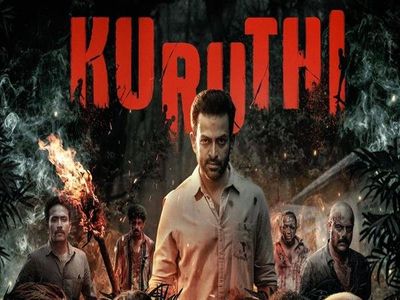 The trailer of the upcoming Malayalam thriller Kuruthi was released on Wednesday. Starring Prithviraj in the lead role, the film is directed by Manu Warrier who had earlier helmed Hindi film Coffee Bloom (2014).

Kuruthi trailer promises a nail-biting thriller with high-octane action that includes high-voltage chase sequences and brutal muddy brawls, coupled with dramatic performances. Prithviraj plays a god-fearing man in the film but that doesn’t stop him from exacting revenge and seeking vengeance from those who have wronged him.

Not just Prithviraj’s character, we hear others in the trailer invoke God’s name. While some seek mercy, a few bloody their hands in the name of almighty. There seems to be also a philosophical angle to the whole story, as the film seemingly ponders over the definition of what’s right and wrong.

The entire film seems to take place during the span of a night. According to the synopsis, an injured cop along with a prisoner knocks on the door of a house, seeking refuge from a killer who is chasing them. The killer, however, is in no mood to give up the chase till he makes his rival pay for his crime with his life.

Prithviraj’s vengeful campaign seems to face resistance from Ibrahim, played by Roshan Mathew, a man of faith, who is also fighting his own inner demons. The fateful night will be a test of the killer’s hate and Ibrahim’s faith.