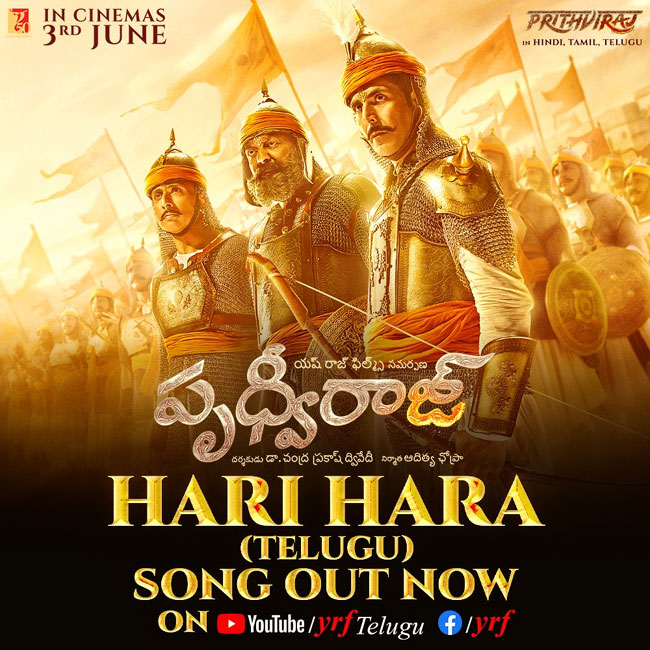 Prithviraj is a Bollywood Bahubali movie that has been heavily promoted by the northern media for the last few years. Bollywood movies are released only in Hindi. But the film is also set to be released in all the languages ​​of the South. Hari Hara has released a video song from the upcoming movie which will be released on June 3 in multiple languages ​​on Pan India Range.

Produced by Aditya Chopra and directed by Chandra Prakash Dwivedi and presented by Yash Raj Films, the film has a Hari Hari song that raises expectations. The Telugu version was released by the unit members. The response to this song in Hindi has already been excellent and so has the interest in Telugu. Comments are coming in that the song has a way of giving good praise to the movie.

If you are watching Prithviraj movie visuals, it seems that another visual wonder has come for Indian cinema lovers. After Bahubali, there was no such thing as a huge VFX movie but a mythical movie that was a feast for the eyes of that level. The belief that this film will fill that gap is being expressed in everyone.

The film has not been aggressively promoted in Telugu so far. It is believed that Prithviraj will be popular here if he promotes a bit of hype. It remains to be seen whether Prithviraj, who has earned the nickname ‘Bollywood Bahubali’, will retain that name.

Previous Dawn director Sibich Chakraborty who has acted with Vijay .. Do you know that in any film? Photo goes viral
Next Knowing from this world wrapped in the tricolor … Ayush Sharma’s post in the name of Dadu, shared the pictures of the last farewell and said – ‘Now Dada will not ring in the phone’